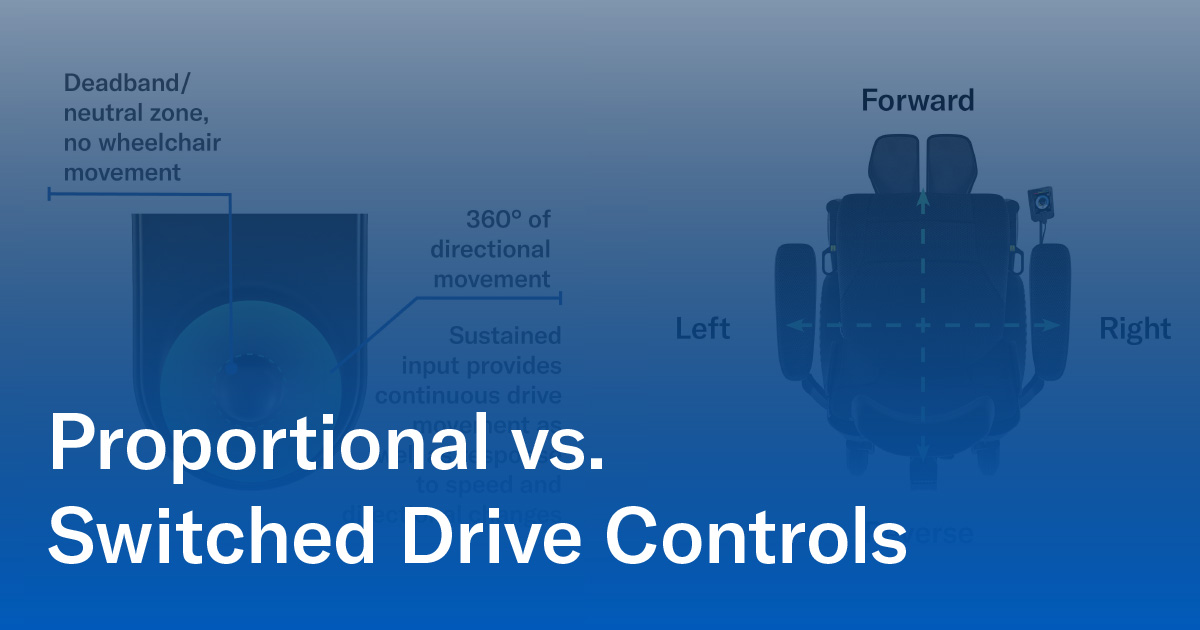 A proportional drive control allows the wheelchair’s movement to mirror the client’s input into the device, most often through a joystick. The speed and directionality of the wheelchair are dependent upon the distance and direction the drive control is deflected from neutral. For example, a minor deflection of the joystick will result in a slower speed, whereas a greater deflection will result in a higher speed. A proportional drive also allows for 360° of directional movement. 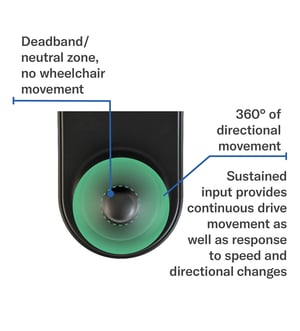 There are a variety of proportional alternative drive control options, some of which include a compact or mini joystick, foot control, and even some head arrays. These different options provide variability in size and deflection characteristics to meet the different strength, range of motion, and coordination capabilities of the user.

With proportional drive controls, the two deflection characteristics you will hear discussed are throw and force. Both can have a significant functional impact and should be considered key components of the equipment evaluation and selection process for this type of drive control.

Switched drive controls, also known as non-proportional or digital drive controls, produce a driving action that is either “on” or “off”, and typically allow for 4-8 distinct directions of movement. For example, the wheelchair may be controlled by four individual switches mounted into a tray – one for each direction of forward, reverse, left, and right.

With a switched drive control, speed is not as variable as with proportional drive controls so optimal setup and programming is essential for efficient control.

One of the main benefits of switched drive control, is the ability to control the wheelchair with a limited amount of movement and the use of different types of switches, allowing for customization and adaptability. Switched inputs may also be used when working with minimal strength, range of motion, or at locations that do not work well with proportional drive controls.

Depending on the setup and type of switched control, they can require increased cognitive demand. However, some individuals may do better with the simplicity of the control being “on” or “off” based on their input into it. It’s a simpler relationship between action and motion than a proportional drive control and allows the individual to drive without grading their movements to generate a desired speed or direction.

Join us next time as we review some specific examples of proportional and non-proportional drive controls, including some of the clinical and consumer-driven reasons behind the selection of different drive control options.

Sarah Lusto PT,MSPT, ATC, ATP is a physical therapist and the Regional Clinical Education Manager for Permobil in the Mountain Region.  Prior to joining Permobil in 2021, Sarah worked at the Kessler Institute for Rehabilitation where she gained extensive experience in neuro rehabilitation. At Kessler, she served as the inpatient wheelchair team lead and a member of the outpatient wheelchair clinic. She has lectured for numerous Occupational Therapy, Physical Therapy, and Medical Residency Programs and was a faculty member for Kessler’s PT Neuroresidency program.  She has also presented at ASCIP and the International Seating Symposium. Sarah is a current member of RESNA and the APTA Assistive Technology/Seating & Wheeled Mobility SIG.