A parent's perspective: Clive and the Explorer Mini Part 2 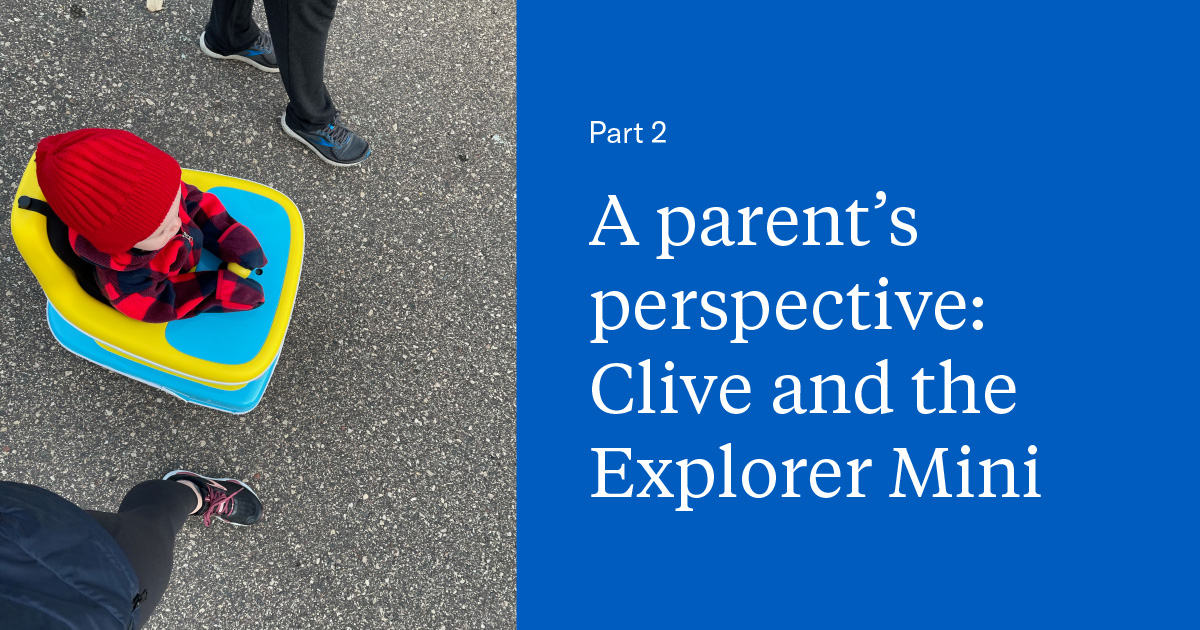 Jennith: We talk about how important development is, but really what’s important to a child Clive’s age is play and fun. How did you integrate the Explorer Mini into your family routine?

Kelly: We got the Explorer Mini in August, and we love taking him out for walks. The Explorer Mini is great to use in the home, but we really like taking it outside of the house. It’s easy to transport and we take it to parks that have paved trails. Kelly: During the week, we get him in the Explorer Mini about an hour a day without him throwing a toddler tantrum. He can definitely handle an hour. It’s good support for him and he can watch cartoons or go play with toys.

On the weekends, we use it all the time. I would say he’s in the Explorer Min 4-6 hours over the weekend.

Jennith: We can see from your videos and posts that he’s super expressive with his facial expressions. Can you talk to us about what you were seeing with his verbal skills?

Kelly: We knew that he understood what we were saying, but he was pretty behind in terms of verbal skills and language. Our [speech] therapist and PT told us that children that don’t have those gross motor skills tend to lag behind in verbal skills. We needed something now that could give Clive independent mobility to help with his language skills without being so focused on being able to sit up or exerting energy. In the Explorer Mini, Clive feels secure and is able to focus on the environment around him and talking. We got the Explorer Mini in August, and by October and November Clive was starting to say way more words. He’s now communicating in sentences. Some of this development is just hitting the 2 year mark, but having a mobility device where he can focus on other things without having to hold himself upright. 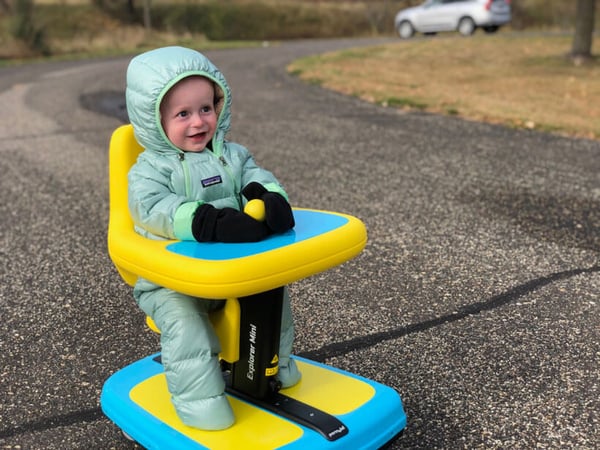 Jennith: That is true, acquiring those verbal skills is just something that typically chronologically develops as kids age. You shared with me these expectations based on his diagnosis, where cognition is not limited. is to not have any cognitive impairments.

Kelly: Yes, his diagnosis is no cognitive impairments, and people with his diagnosis tend to have slightly higher IQs. We knew he had the capability but was far behind. His skills set went from 0 to 100.

Jennith: From a clinical standpoint, the thought has been that someone Clive’s age, 18 months-24 months, would be considered early for power mobility. But really, your experience has echoed that mobility should be on time with his peers. Hearing that his verbal skills caught up was evidence of how important on-time mobility is.

Did you ever have any hesitations or concern with giving Clive the ability to move himself?

Kelly: We knew right away when our neurologist said 2 years old, we were going to get a mobility device, but we were definitely nervous. The Explorer Mini is a pretty heavy piece of equipment which is great, it needs to be, and the Koala is a 200 lbs wheelchair. We were a little hesitant with trusting a 2-year-old not to run someone over, but we have support groups within the Muscular Dystrophy world where parents who came before us who said that we would be so surprised how quickly your kid will pick this up. Within a week Clive was able to drive around our house without bumping into anything. He knows exactly what he’s doing.

Thank you for following along with this short 2 part blog series. Click here to watch the full interview with Kelly and to learn more about the Explorer Mini. Interested in more information about power mobility for infants & toddlers? Click here to sign up for our upcoming webinar Announcing "A Guideline for Introducing Powered Mobility to Infants and Toddlers". 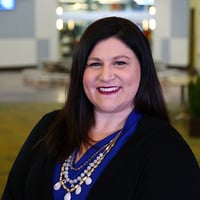 Jennith Bernstein received her Masters in Physical Therapy at North Georgia College & State University and returned to complete her transitional DPT at University of Texas Medical Branch in 2014. While at Shepherd Center, Jennith, initiated a “Seating Champion” program to improve the inpatient and day program clinicians understanding of complex seating, pressure management and skin protection as well as research reviews, advanced programming and adjustments. She was also part of a center wide multidisciplinary focus group for reduction of hospital acquired skin breakdown. Jennith has served as a volunteer teacher at the Universidad Mariano Galvez in Guatemala, instructing spinal cord injury curriculum as well as seating and mobility. Jennith has presented at national conferences such as RESNA, ISS, and the APTA NEXT conference. Jennith has been a practicing PT for 12 years and spent the last 10 years at a model SCI center (Shepherd Center) in Atlanta, Georgia. Jennith joined Permobil as the Clinical Education Manager for the Central Region in 2016.