Come Roll with Me: Increasing Community Awareness of People with Disabilities 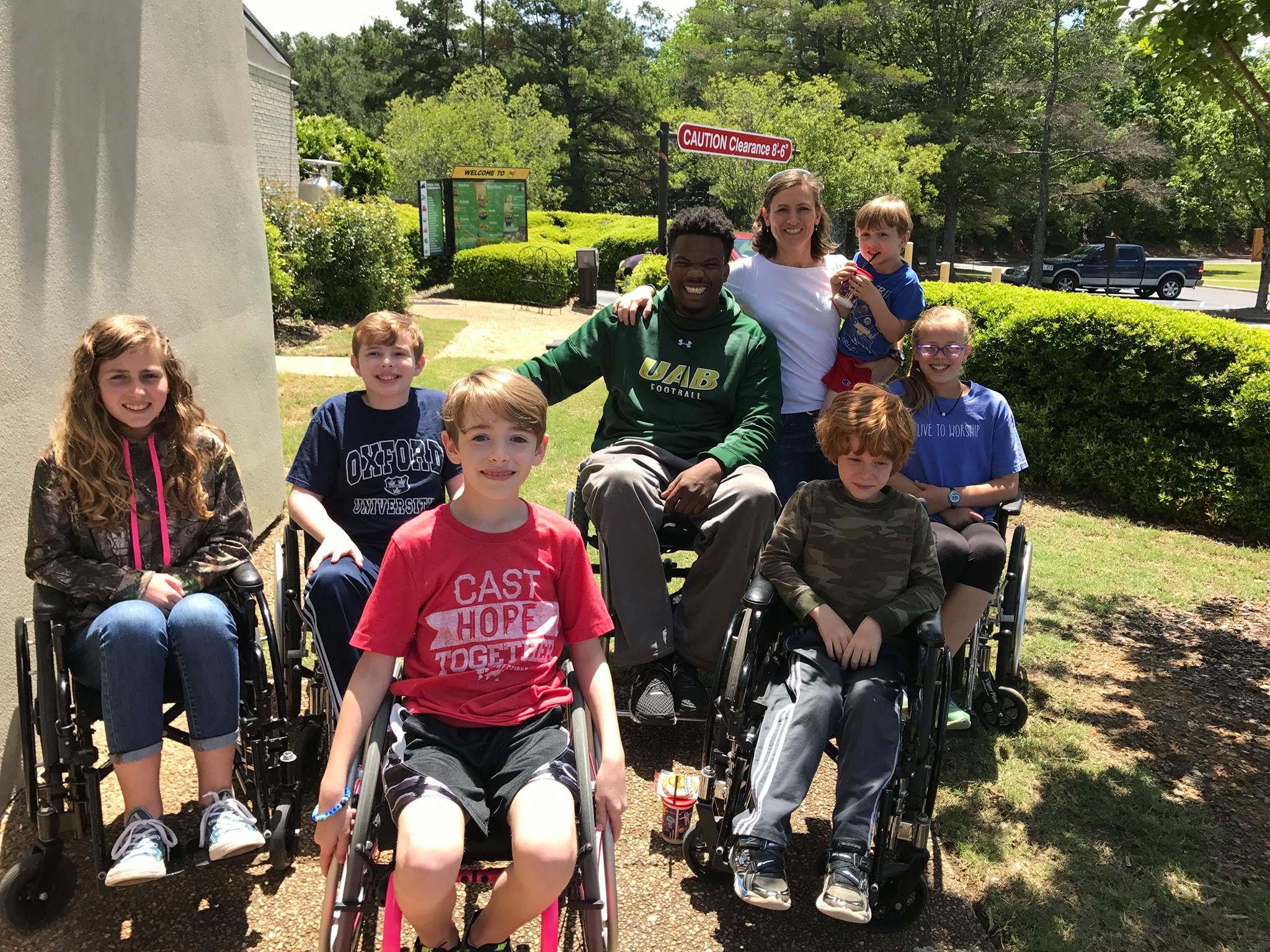 One of the best ways to raise community awareness of any issue is to start early and teach the children. Cathy Carver, a PT and seating specialist at UAB in Birmingham, Alabama noticed that there seemed to be a lack of awareness and comfort level in her community related to people with disabilities. So she decided to do something about it and developed a program for school aged children. Check out this post by Mike Hamilton, President of the Alabama DME Association and learn about a program that could be replicated in any community!

Come Roll with Me

It all began with a conversation between Cathy Carver, PT, ATP/SMS (Physical Therapist at UAB/Spain Rehabilitation Center, Birmingham, AL), and a friend who home schooled her children. Cathy asked, “Have your kids ever encountered a child in a wheelchair? If they did, do you know how they would react?”

Cathy responded to the answer by arranging for those children to visit the local library and spend, at total, about three hours in a wheelchair. She borrowed five wheelchairs from a local DME provider who was supportive enough to bring them to the event and pick them up at the conclusion. The kids had to do various activities they were used to doing from standing but from a wheelchair including checkout books, access computers, use a restroom, find and use a water fountain, use the elevator and try out the outdoor playground. Then they loaded up the wheelchairs and ate at a local restaurant from the wheelchair. They also had an extended conversation with a real wheelchair user with an opportunity to ask any questions.

The program now has a name and the involvement of a local university where the curriculum allows occupational therapy students to assist and get credit for participating. Also, many wheelchair users volunteer to come speak to the kids, and most recently, the involvement of the library where it all began. Five wheelchairs have been donated to the program, which has been a tremendous gift.

A Day with the Come Roll With Me Program

This writer had the privilege of tagging along with the latest meeting. At the library we met Cathy, two occupational therapy students, two moms and five home schooled students ranging in age from eight to thirteen. The students were invited to pick a chair that looked to be about the right size for them and take a seat. The three professionals made a few needed adjustments and the adventures began. 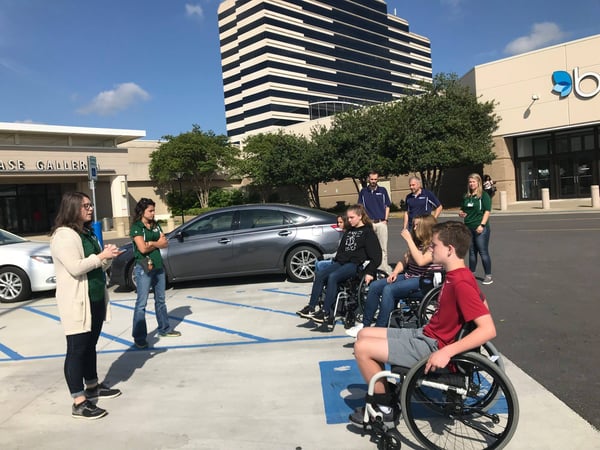 The students were instructed to roll into the library and visit the restroom, getting a drink from the water fountain on the way out. Then they were asked to peruse the bookshelves and pick out a book or two to check out. They very quickly learned how to maneuver their chair in ways that helped avoid bruised knuckles and getting stuck in places that were difficult to escape. They moved chairs out of the way, so they could sit at the table, remembering to replace the chairs when they left. They learned what to do if the book they wanted was out of reach on the top shelf. After some time in the wheelchairs, it became apparent to the young ladies that it takes far longer for someone in a wheelchair to accomplish most of the same activities they can do as able-bodied kids.

After checking out the books, they used computers set up for kids, then took the elevator to the basement where they were asked to lap a long, wide hall. No one mentioned speed, but every single one of them seemed intent on beating everyone else’s time. After about four minutes, all were worn out. An OT student told them that they just covered the distance from the parking lot to the closest store in the mail and asked if they thought they could manage visiting several stores at that pace.

One of the kids asked what they would do if a fire broke out, as the elevator and stairs were the only means of egress. Cathy showed them how an adult companion could safely back them up the stairs, and how, if unattended, they could sit on the bottom stair tread and bump their way up using their arms. Throughout the time together, the young students got to hear what physical therapists and occupational therapists do in their careers and how they are different yet complementary to each other.

They were instructed in the proper technique and asked to safely roll up and back down a very steep ramp to the parking lot. They rode around sidewalks of various grades. After about an hour of activity, they gathered for a conversation with a 55-year-old wheelchair user, who was a police officer and career member of the Army National Guard who became paraplegic because of an unusual combination of a training accident and a blood disorder.

He told all about his and his family's experiences, described how he did what he did, and answered many very cogent questions about a wide variety of topics. It was a beautiful opportunity for him to break down barriers for kids and parents on how to start a conversation or friendship with someone who uses a wheelchair. He taught them how to ask questions and how to view the wheelchair as an extension of someone’s body, and it allowed him to share what he wished every able-bodied person understood about people who are in wheelchairs long-term. It was if scales were coming off the eyes and hearts of the kids and their moms. They were fascinated. 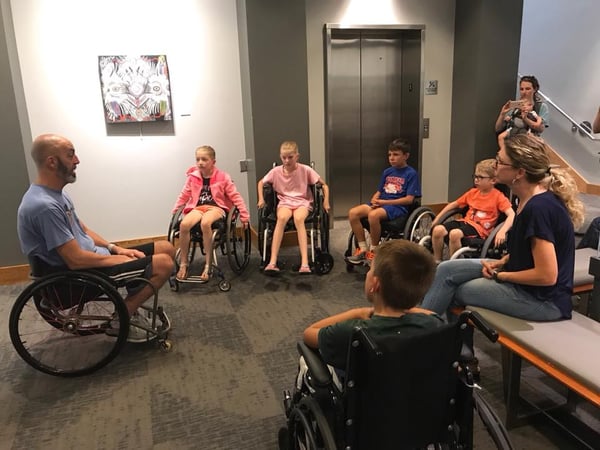 Interacting with the Real World

After a lengthy conversation, the kids transferred themselves into their parents’ cars, and the moms learned how to disassemble and pack the chairs in their vehicles, and everyone adjourned to a nearby fast food restaurant for lunch. They watched their new friend demonstrate how to drive with hand controls and dismount from his van-with-ramp on the way into the restaurant. They got to see just how independent he is and can be with adaptive equipment. 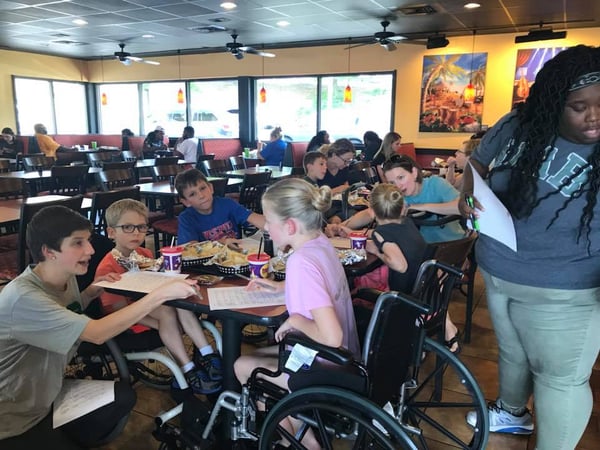 They ordered food from their chairs, seated themselves at tables where the staff had removed the chairs, and showed delightful skills and persistence in maneuvering into a position to get ice and drink refills. Then the Q&A with the new friend resumed over lunch. They also disposed of their trash and returned trays from the chairs and accessed public restrooms.

When they returned their chairs, all showed a little reluctance in giving them up, having become more skilled than you can imagine with very little instruction or experience.

The OT students do a pre-and-post interview about their knowledge about and attitude toward wheelchair users, and the mothers agreed to a variety of projects as a follow-up, such as essays, developing plans for redesigning their bedrooms, or bathrooms to accommodate a chair, and much more. Cathy had several suggestions, and both the kids and their mothers had some good ideas for expanding on their knowledge and applying it to the real world.

The Future of Come Roll With Me

Cathy is working on plans to make the program available to more home school groups and eventually public schools, starting with summer programs. The library has already agreed to add “Come Roll With Me” to the programs available upon request, and the restaurant is tripling the number of handicapped parking spaces it offers. 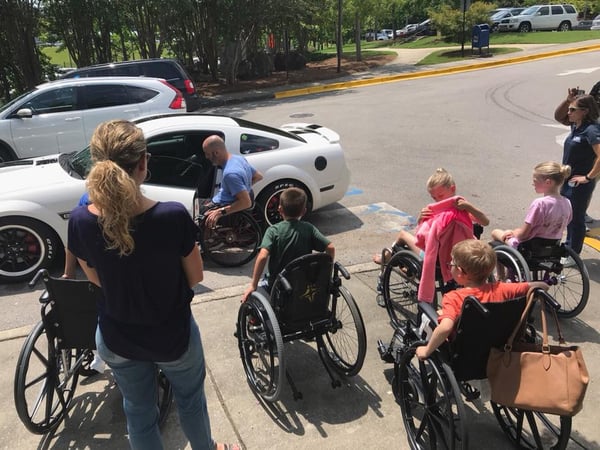 The children had a great time, and there was a constant stream of lights going off over their heads as they realized that not all public restrooms were as accessible as advertised, that wheelchair users are real people who must use wheels instead of their legs, and that it takes a lot to live life from a wheelchair—mainly a lot of extra time and determination!

The program started with 4 children in its pilot and after 1 ½ years has allowed almost 100 children and 45 parents/adults to participate. And we are just getting started. This does not include the indirect impact it has had on the local library, the restaurant, and the countless on-lookers in parking lots and in the facilities. The goal of this program is to influence kids while they are young to appreciate and respect people with disabilities and break down some of the barriers that wheelchair-users face. Anyone who can enlist the services of a willing PT, OT, and an assortment of kid-sized wheelchairs could surely find parents who are interested in expanding their children’s horizons. This is a great public service that should be available everywhere. Follow along with their journey on Facebook, or for more information, contact Cathy at comeroll16@gmail.com.